Donate at Fractured Atlas to help us keep running G.E.E.E. 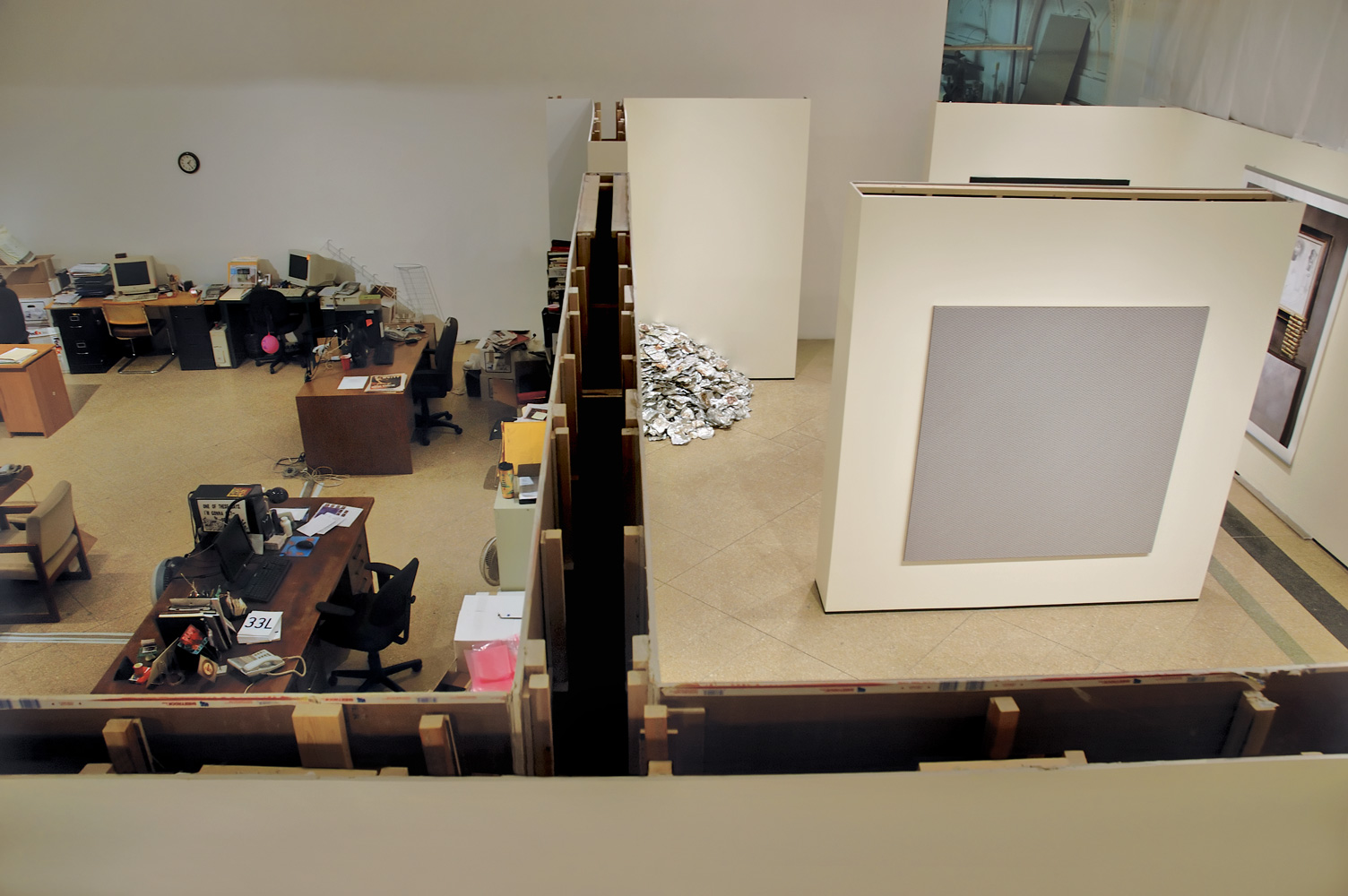 Cream Co. (Chicago) has been enlisted to arrest Hyde Park Art Center’s move from the Del Prado. In this pause—between the Center’s long history of success and its new life in a new setting—the administrative offices themselves have been suspended within the historic Ruth Horwich Gallery, providing a chance to witness the details of art’s administration and, with those offices reframed, to witness the art that lingers there, on the desks and the walls, in boxes and jars.The remainder of the gallery, refurbished to evoke the institutions of art at their most serene, has been committed to the artists who work for Cream Co. Their artworks (individually and collectively) interrogate the relation between use value and aesthetic value, clock time and natural time, the specific and the universal, epistemological limits and the longing to transcend them. In their juxtaposition the two spaces ask how art itself can administer—how it can organize, reorganize, and reinstitute—the temporal and spatial registers within which we experience the real, including real art. 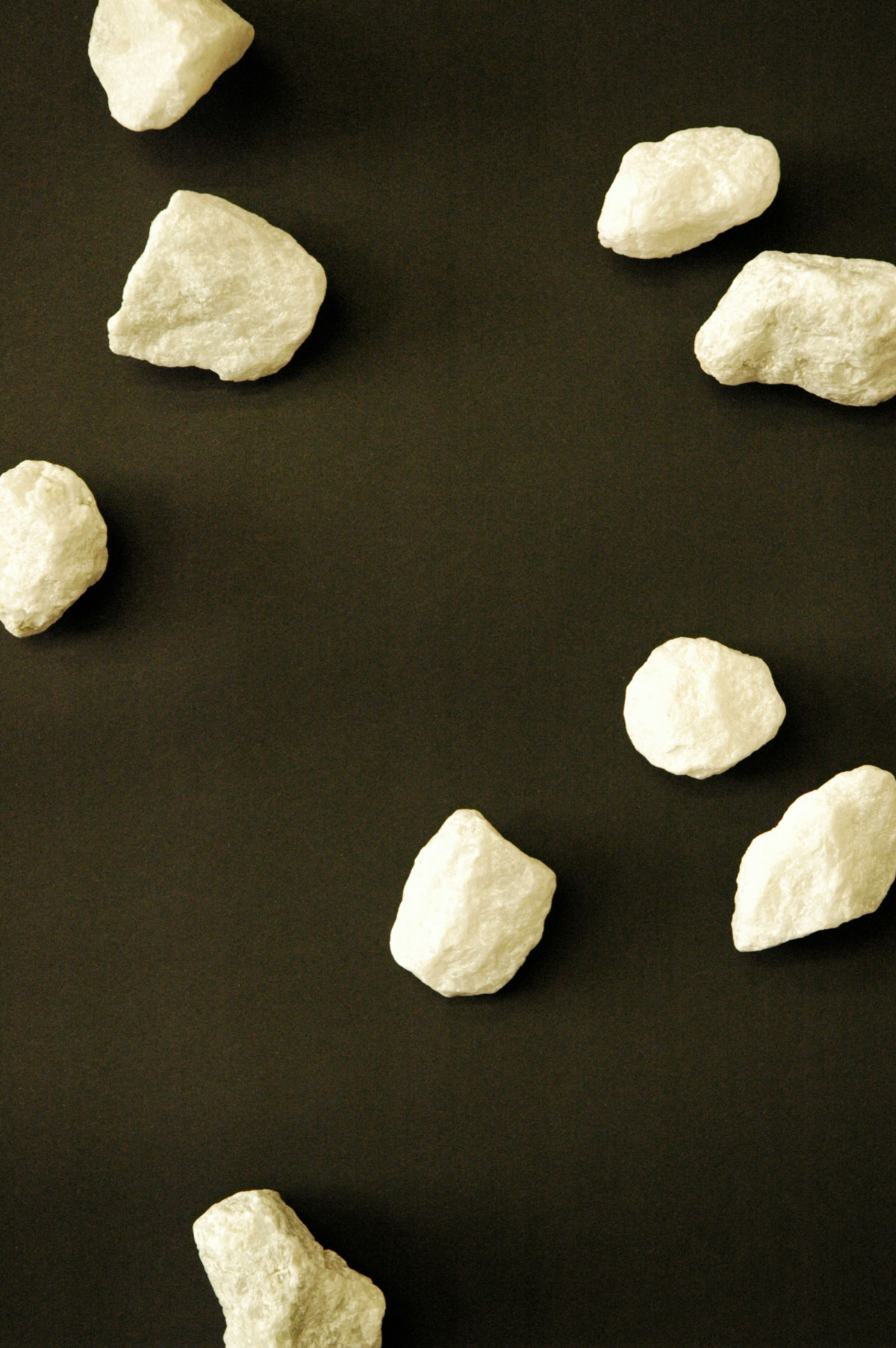 Over the last half decade, Sasha Earle has developed a counter-demography by which to represent the lives of the famous, and by which to deploy precise representation on behalf of abstract composition. Demography may be understood, broadly, as “the study of human populations, including their size, growth, density, and distribution, as well as statistics about income, mortality,. &c.,” but the rock portraits comically rely on two arbitrarily related statistics, fame and height. In this group portrait of major writers, the perpetuation guaranteed by fame has been replaced by the perpetuation guaranteed by material substance. While the rocks of her other portraits may be most legible as “stars,” here they become miniature bleached tombstones that dislocate beloved authors into the realm of homogeneous, affectless anonymity. The authors represented include William Wordsworth, Samuel Taylor Coleridge, Alexander Pope, Edgar Allan Poe, and Lord Byron. For the most part, the data derives from less famous writers’ diaries, which has become information on the Web.

This superb, monumental painting of Edgar Allen Poe is based on the “Ultima Thule” daguerreotype, for which Poe sat in 1848 (when he was 39), the year before his death. In Alexander’s Weekly Messenger (January 15, 1840), Poe wrote that daguerreotypy “must undoubtedly be regarded as the most important, and perhaps the most extraordinary triumph of modern science.” Moreover, this pioneering theorist of modernity recognized that such technology would be integral to everyday culture—less as a crucial component of some new scopic regime, more as a mode of perpetuating the physical and psychological ephemera of human-being. Whereas a critic like Baudelaire thought of photography as ringing the death knell of painting, here Coyle, placing himself within the long tradition of artists who relied on photographic sources, dramatizes the ongoing triumph of oil painting, re-staging the kind of sensuousness it can achieve, the kind of affect it can express within the various trajectories of reproduction and re-mediation. (Timothy Cole reproduced the image as a tinted wood engraving to accompany an article published in Scribner’s Monthly [May 20, 1880]; by now it has achieved the status of a mass icon, appearing on t-shirts, posters, mouse pads, and wastebaskets; the original daguerreotype was last seen in the 1860s.) Though Coyle is certainly best known for an interdisciplinary practice that includes painting and video, Big Poe reclaims the value of manual reproduction within yet another era of art’s technological reproducibility. 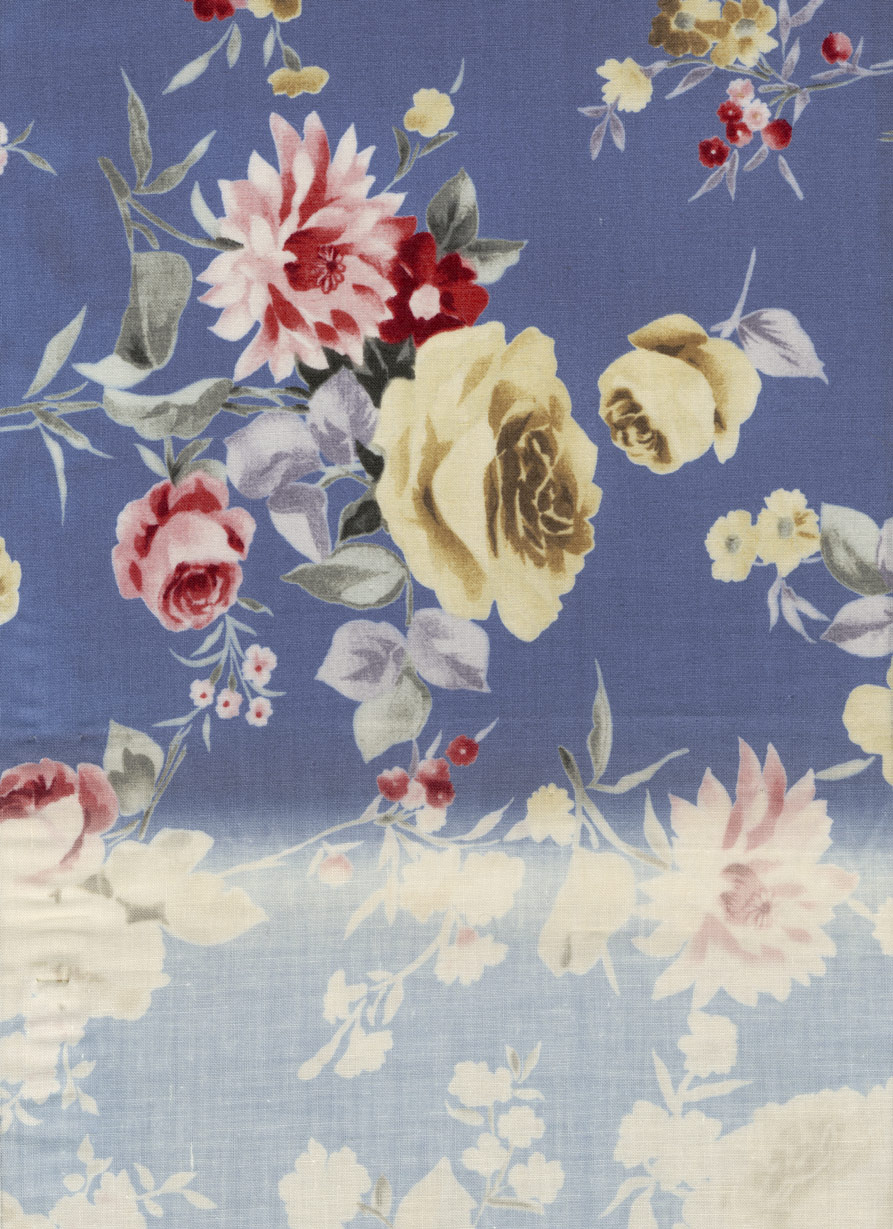 If, for Poe, the exterior landscape provided “the fairest field for the display of the imagination, in the endless combining of forms of novel beauty,” then, for Leah Finch, the interior landscape of the floral drape becomes the field for recording a kind of slow, relentless deformation. Though Finch preserves the faded flowers, bleached by one year’s exposure to the sun, she does so while leaving them bleached of any symbolic significance. If there is melancholy here, it is only the melancholy of time passing, of the mutability of decor, of the impermanence of the fabric of domesticity by which we mean to comfort and sustain ourselves. 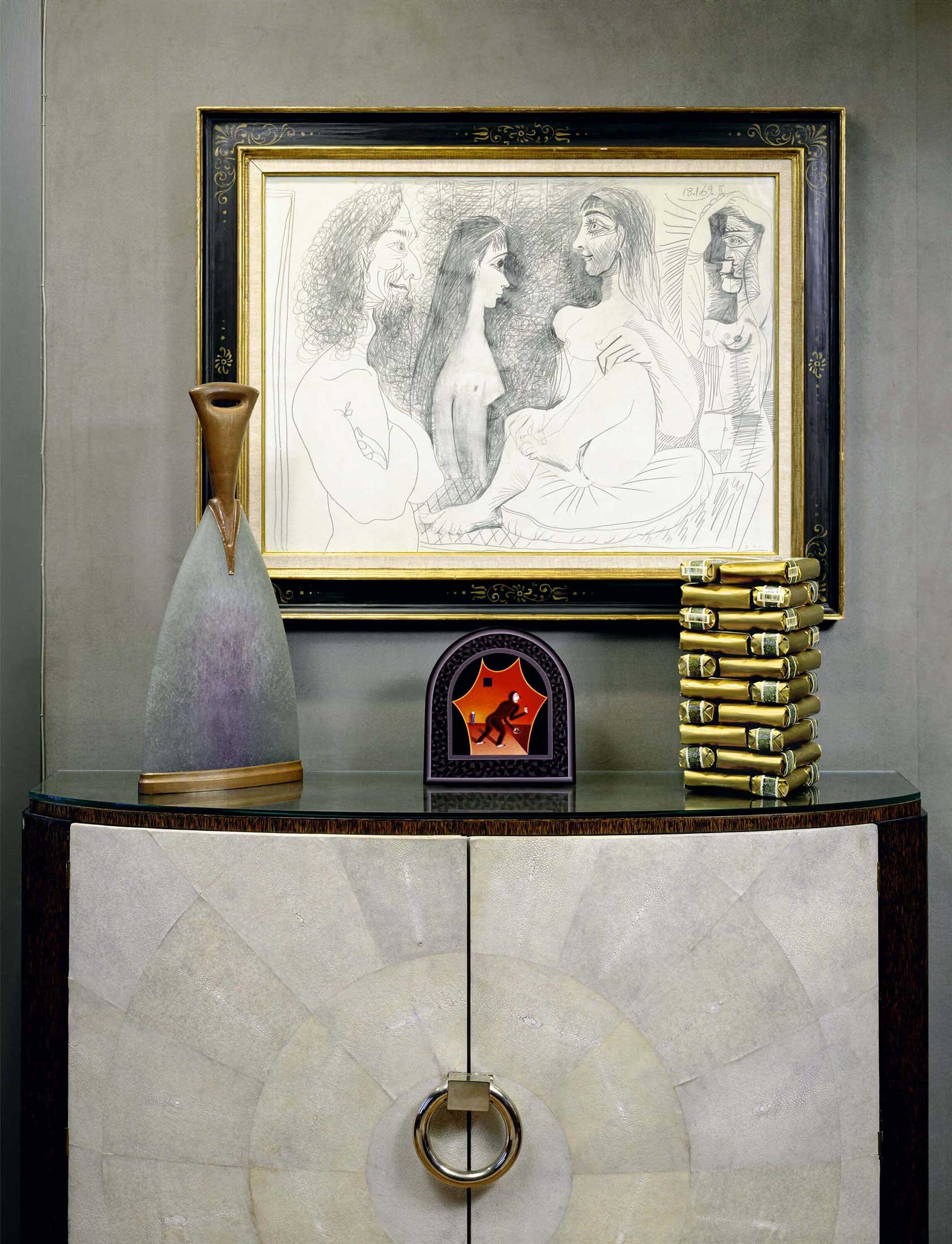 With arch formality, this photograph (from the Krane/Kiresuk Interiors series) records the juxtaposition of the art of Picasso, the art of Jim Nutt, and the art of the new boutique bath industry. Most simply, the image stages the longing to find or project beauty throughout our object culture, and to produce aesthetic value within a space of intimacy. But there is some starched, hygienic, gothic aura as well. It is as though the aggressive prominence of the cabinet, a stage set replicating the contrast of paper and frame, refigures the act of framing (not excluding photographic framing and museal framing) as an act of containment—as though it recodes collecting as the calculus of exclusion. Despite its voluptuous dimensions, the image defines display as an absurd drama of the withheld, drawing attention to the beneath, the beyond, the somewhere within. 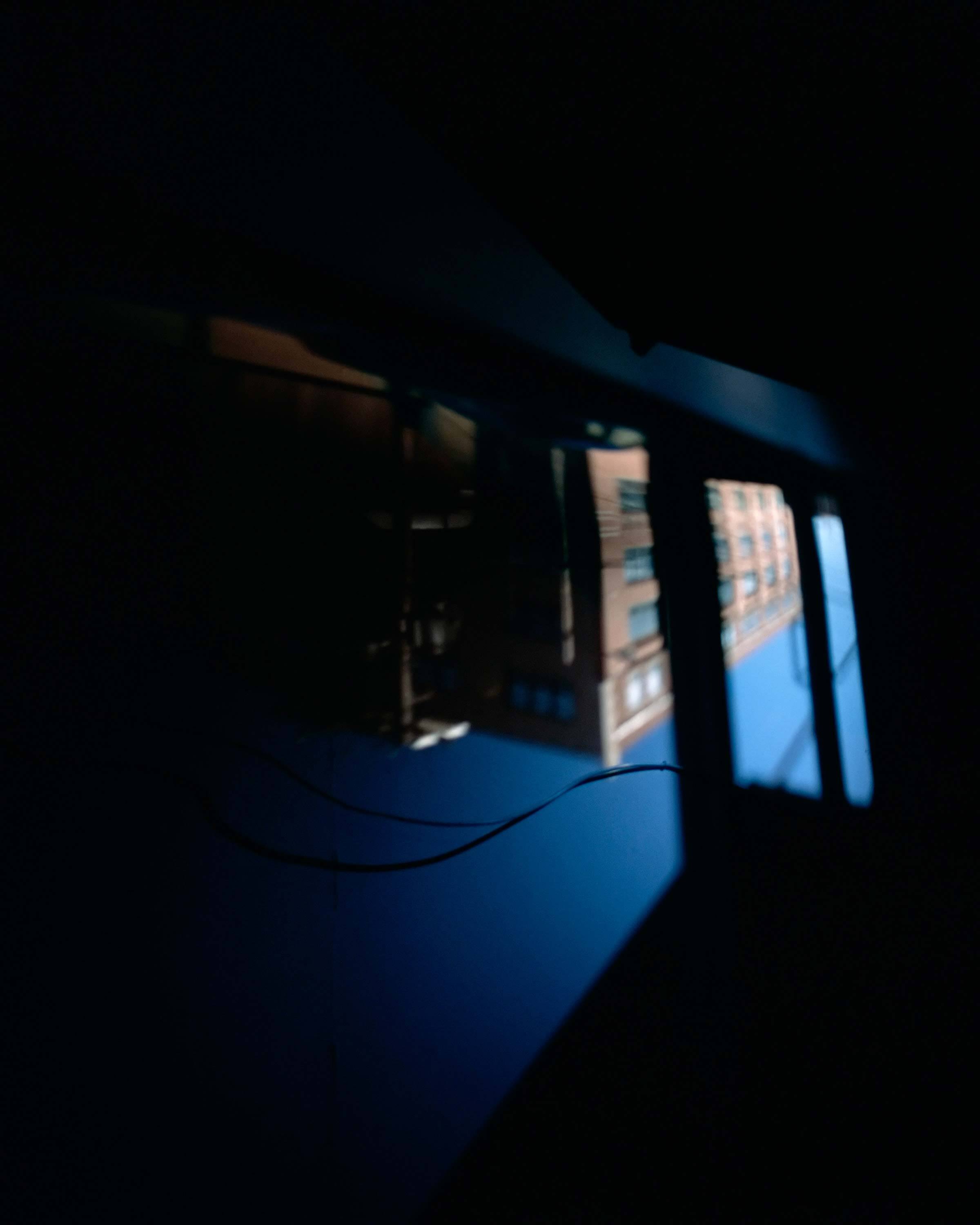 On February 18, 2003, in the basement of Gallery 312, two members of Cream Co., while preparing the Really Real exhibition, discovered this image behind two pipes on a cement wall. The image (of the buildings along May Street) was being projected by an accidental camera obscura, with a circular hole in the first floor baseboard serving as the aperture. By excavating the diminutive image and reproducing it as a large format photograph, Kiresuk ferrets out and dramatizes the hyperpresence of the camera obscura in the history of Western art: from Daniel Barbaro’s advice (in the 16th century) on using the camera obscura to perfect color and perspective; to Francesco Algarotti’s insistence (in the 18th century) that “the young painter... begin as early as possible to study these divine pictures” that had made Italian realism possible; to the impetus it provided for the pinhole camera (a source of inspiration for both Niepce and Talbot); to its return (as medium or referent) in the work of such contemporary artists as Vera Lutter and Rodney Graham. In 1622, Constantijn Huygens declared that “it is impossible to express the beauty” of the camera obscura image, nature’s own act of visual reproduction.) 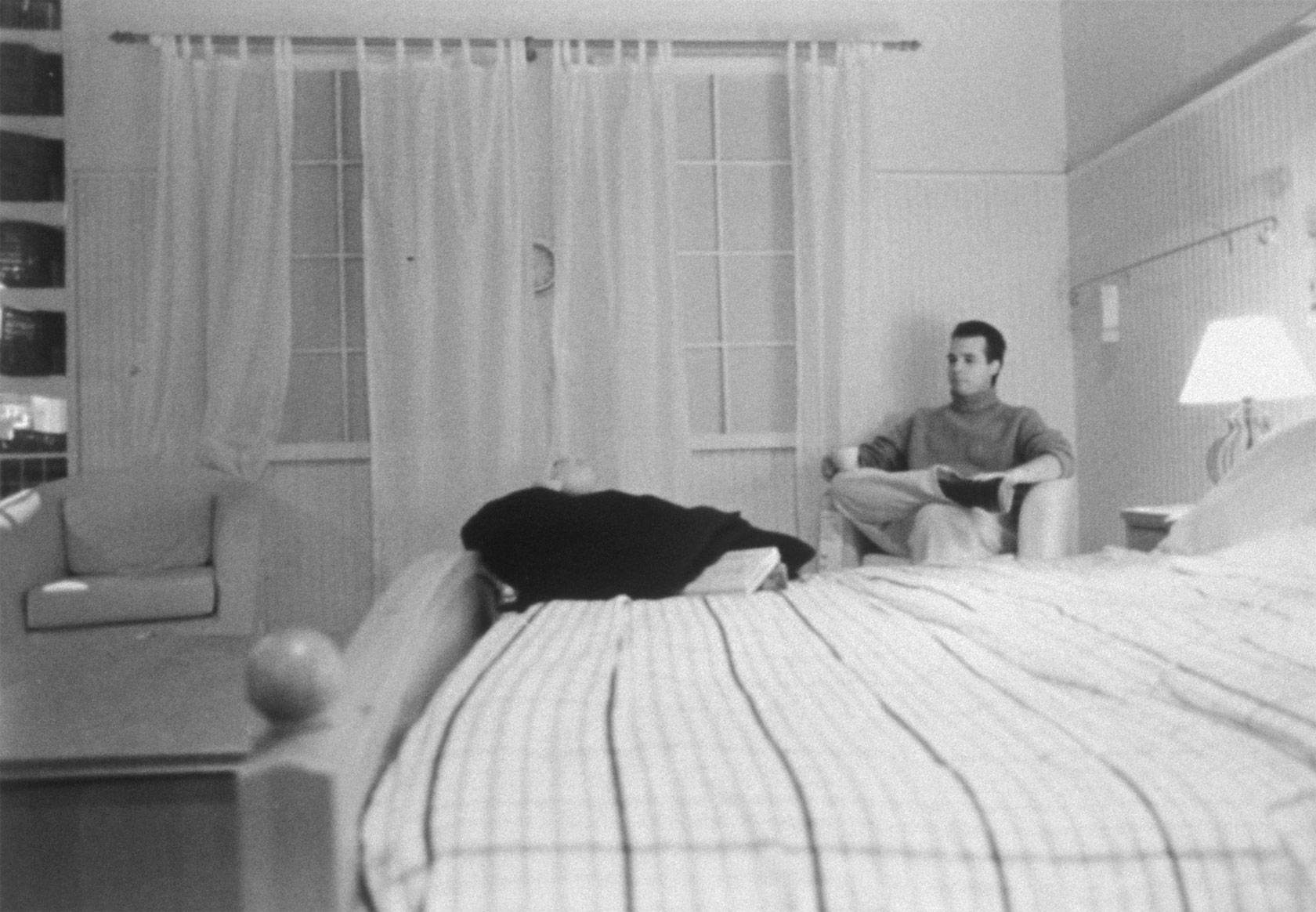 For Rooms, 2001 (“Ikea I-V”), Photos photographed customers at the Ikea store in Schaumburg, Illinois, as a way of documenting the life history of the aesthetic we call modern, telling the story of modernism’s destiny within consumer culture. Shot with a 35 mm camera and produced as small format, black and white images (presented here in Ikea frames), the pictures hark back to an earlier moment in photography just as the Ikea store harks back to another era of design. In its effort to make the modernist aesthetic available to the masses (an aspiration shared by the likes of Frank Lloyd Wright and Marcel Breuer) the Swedish retailer has accepted the pedagogical productivity of competition. Lena Simonson-Berge, an Ikea executive, has explained, for instance, that Target is “helping the modern movement, so that helps us. . . . It's in more people's vocabularies than before.” The “modern movement” itself has taken hold, she argues, because “People have less time. . . . People are interested in living a little lighter.” Amid all these banalities that accompany modernism’s massification, what, Photos seems to ask, can we continue to find compelling? What do we learn when “the modern movement” becomes the vernacular? 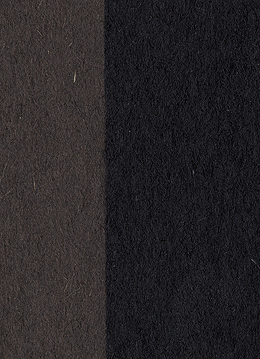 In his recent work Bill Gerhard reduces the production of the formalist image to a sequence of minimal, quasi-photographic acts: the exposure of black paper to sunlight. “Each sun faded paper is a heliograph, or sun drawing that measures the duration and intensity of sunlight. Everyday, using sheets of folded or masked paper, I make exposures for a predetermined period of time, much like a photographer would. The resulting works on paper are site-generated representations of light and time recorded between each folded segment or measured increment.” With the contingencies of locale and weather transcribed onto a predetermined grid, the geometric abstractions are nonetheless indexical. This is a body of work energized by the relays between sensitivity and indifference, the ephemeral and the stable, the real and the ideal. 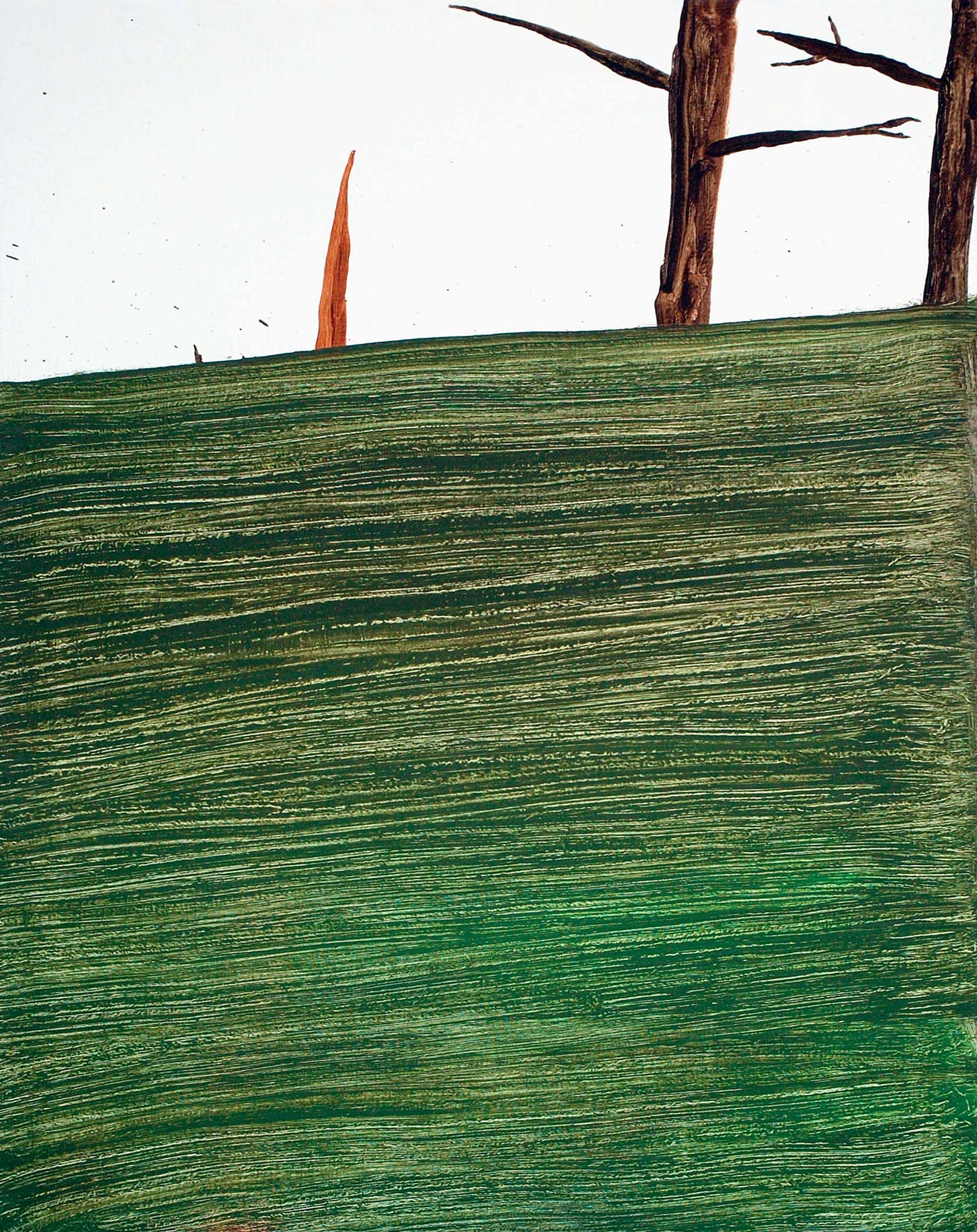 In a series of paintings from 2004 and 2005 (the result, he has said, of his fascination with Thoreau), Howard Fonda focused on isolated trees to expose the dissolution of landscape into abstract form, or its generation of line. Tree assumes a different task by asking what the minimum emblematic requirements are for a canvas to read as a (traditional American) landscape even as it reads as hastily brushed paint. On the one hand, the painting recalls the exaggerated foregrounds and stark massing of Andrew Wyeth. On the other, it utterly abandons Wyeth’s ruralism and localism, evacuates the image of (almost) all sentiment, and thus helps to disclose the formalism within a body of work that has become inseparable from American mass culture. Not so much Walden, then, as a stage set for Waiting for Godot. 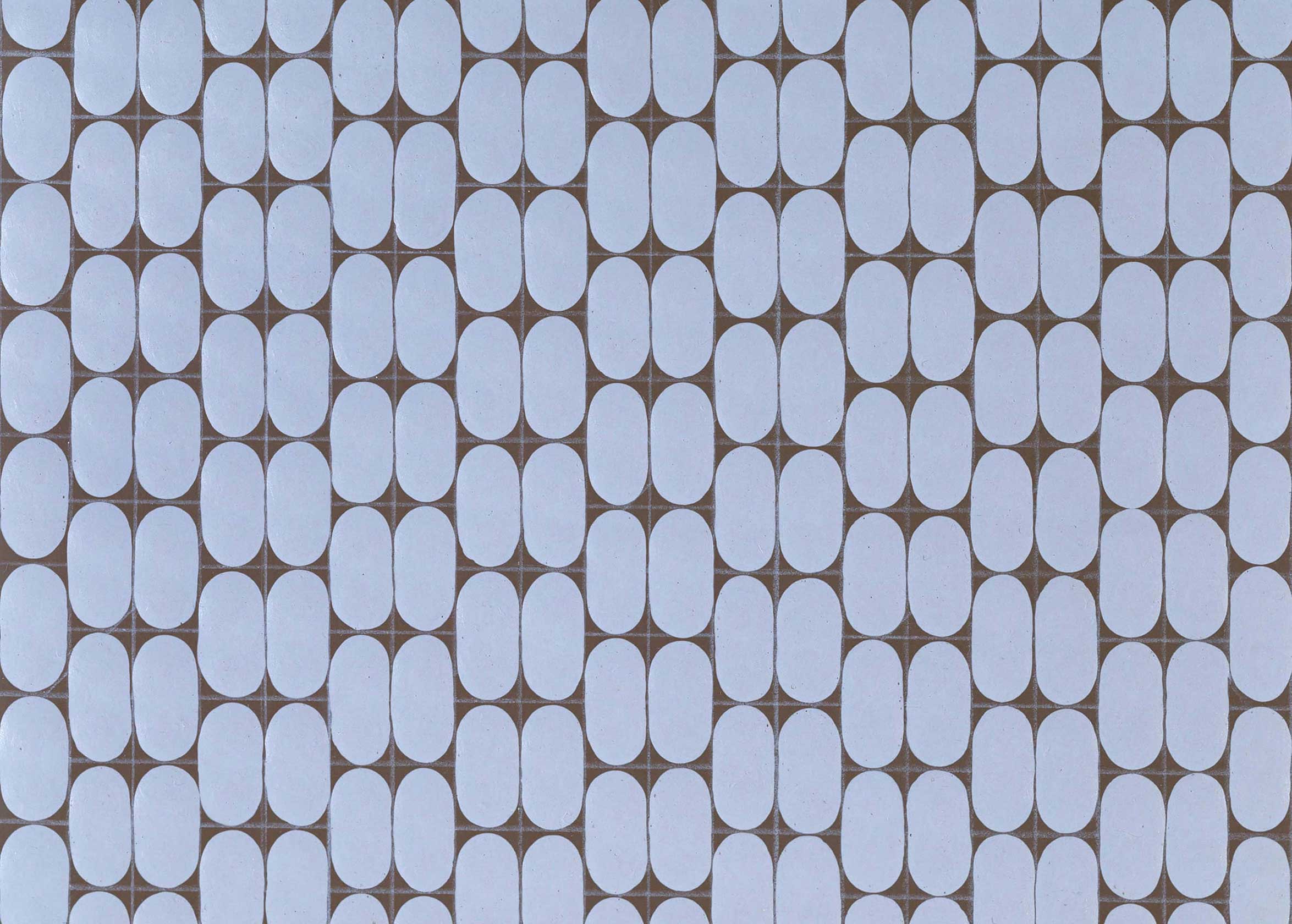 This superb, monumental abstraction is but one panel (the third of five completed) from a series of unknown duration. The series will have documented the color of a delphinium flower as it fades, infinitesimally, through shades of indigo and pale blue and off-white to the shade of no shade, the colorlessness of disintegration. Such a study of change-over-time might well be imagined as a site where the genres of landscape and history painting dissolve into one another, distilled into a sequence of small and slight sensations. More readily, such “time lines,” as Bergman has come to call them, evoke classic moments in the history of modernist painting (Seurat’s pointilism, say, and Agnes Martin’s minimalism) even as they bring to mind a host of other media (from mosaic to needlepoint, from print to the digital screen) all the while insisting—against those latter evocations—on the integrity of the painted mark and the mastery of stretched canvas. The marks themselves—each a scene of exquisite replication and individuation—register the fate of the moment, of the momentary, within the work’s own production. All told, then, Bergman effects a drama of interrelations among the temporality of making, the temporality of the natural specimen’s unmaking, and the supposed durability of art itself. Meanwhile, she perpetuates an aggressively ultramodernist look and feel that derives from a passive and empathetically mimetic act of representation, of historical documentation, of witnessing and record keeping. 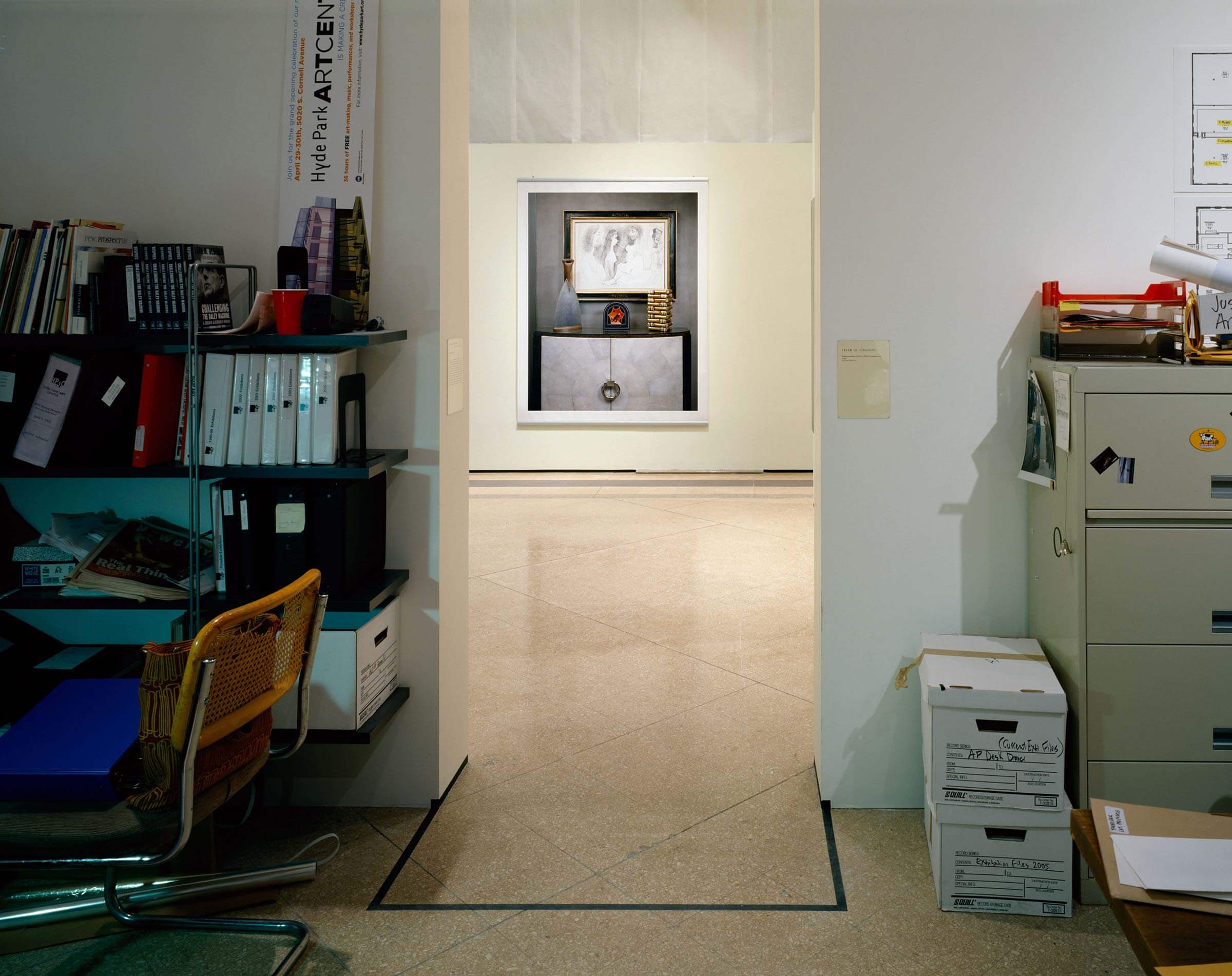 Want to hear more about Cream Co.? Get in touch.